Background to the Gender Recognition Act

In the 1990s and 2000s, a social consensus was being reached that trans people needed a legal framework through which to affirm their identities. It was becoming incredibly obvious that existing protections were failing trans people, by: 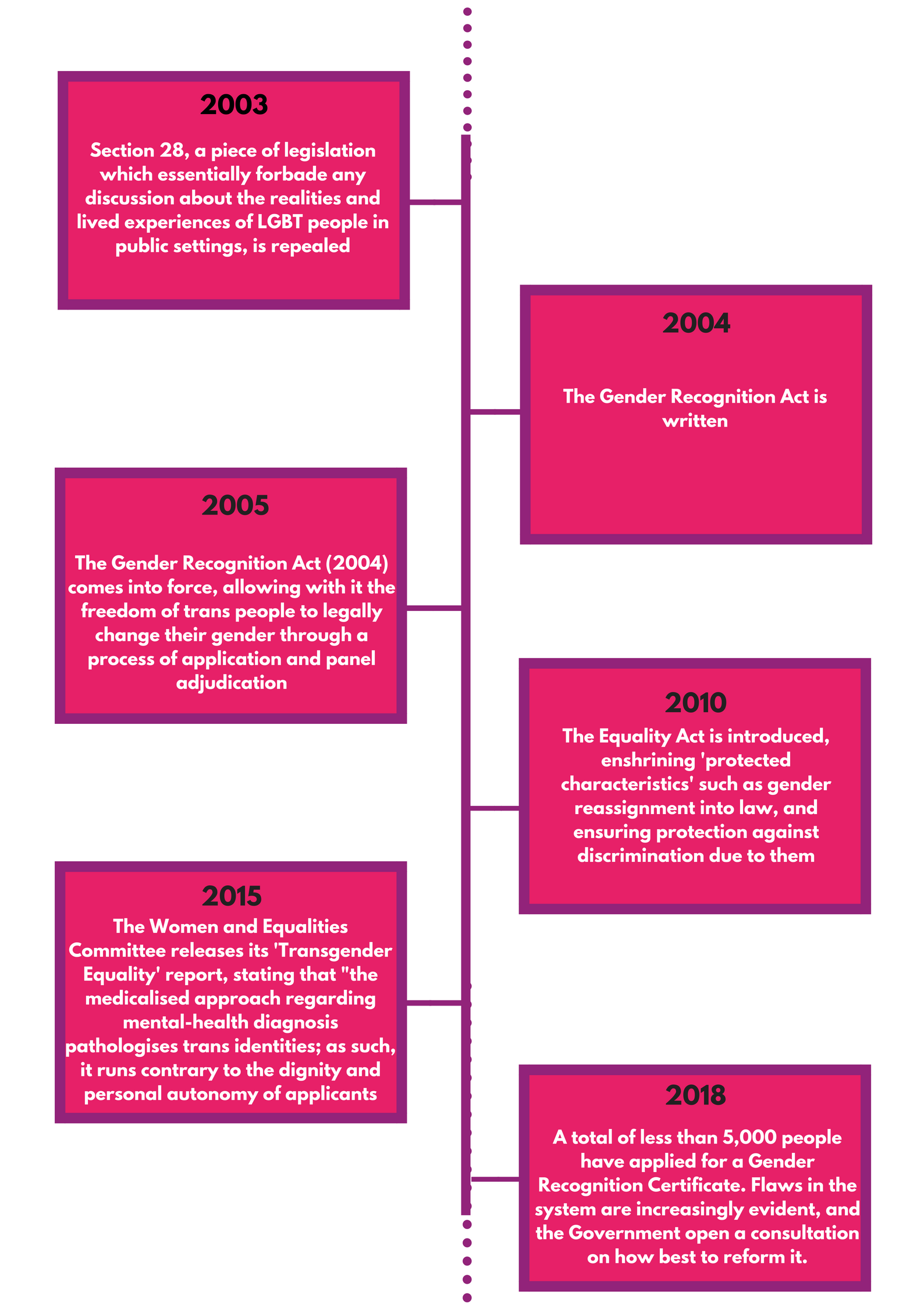 How did change come about?

The government at the time, working with Press for Change and several other organisations, created what was a piece of ground-breaking legislation, leading the world when it came to trans rights. Without these organisations' work with the government, trans people would have no framework to legally affirm their identities, and people would continue to be denied equality under the law.

Problems with the system: ONE PIECE

Gaps in the current system have been becoming increasingly apparent and, responding to the Government's own Women and Equalities Committee's recommendations, the Government has now committed to consulting on fixing these issues. 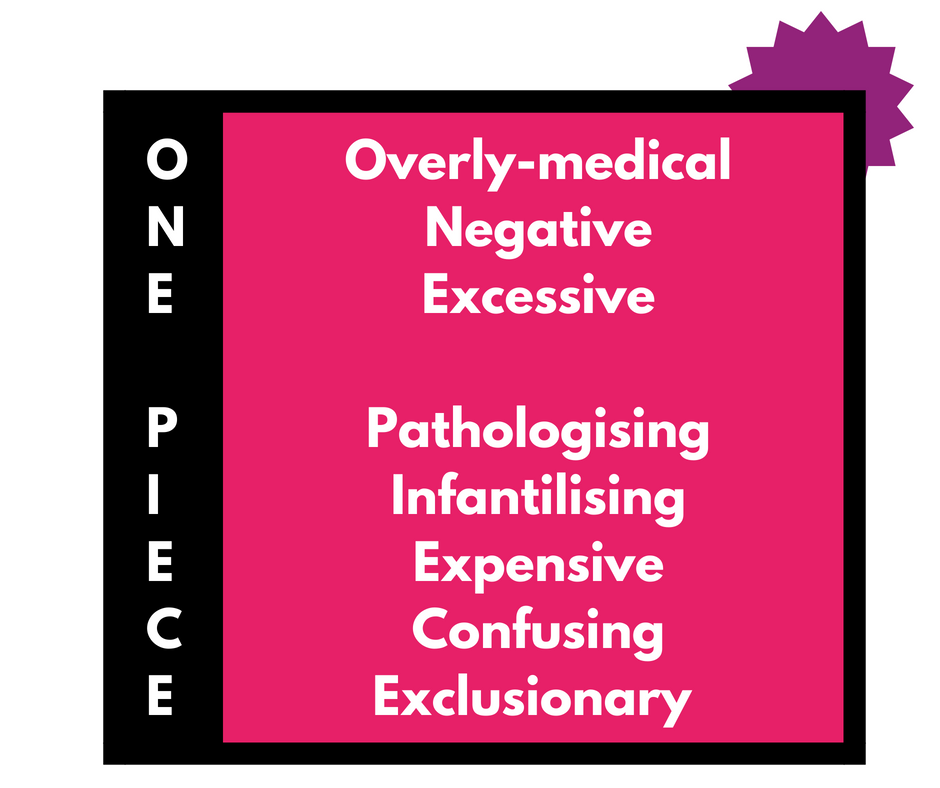 It seems as though the Gender Recognition Panel make their decisions arbitrarily, relying on medical testimony to confirm whether someone has taken ‘enough steps’ to legally confirm their gender identity. For example, there have been cases of the Panel forgetting whatever their normal rules are, and denying and/or delaying an application as someone was off by a few days when writing down when they had top surgery. These medical facts (surgical interventions, starting hormones) are held up as the holy grails of gender affirmation by the panel, with everything else (lived experience in your actual gender, social transition) being all too often ignored. It denigrates and makes invisible those trans people who may not desire or be capable of a medicalised approach to transition.

There continues to be a spousal veto in England, Wales and Northern Ireland, meaning that should a trans person's spouse withhold their signature on the forms, the process is put on ice. The spousal veto was erased from Scottish law with the assent of equal marriage legislation there, but the UK Government continues to allow this flagrant disregard for trans people's Right to a Private and Family Life. A shocking 44% of trans people's spouses have tried to stop their trans partner transitioning, and 29% have made getting a divorce intentionally difficult for their trans partners. It is these people who hold a determining veto on the issuing of their partner's Gender Recognition Certificate and this needs to end.

the Gender Certificate Panel has too much power over what should be an intimately personal decision and process. These strangers, who you will never meet, will decide if your declared gender identity has merit and accordingly permit or deny a Gender Recognition Certificate in your gender.

There has to be a diagnosis of gender dysphoria from two medical specialists (each, incidentally, charging around £50 for this to be submitted in writing). This removes autonomy of trans people in deciding whether they are trans enough and says that they can only legally be recognised if they're medicalised. Many trans or non binary people are not able or do not want to enter into a medical pathway where their lived experiences are dissected by a stranger, especially when the end result is the passing on of information to another group of strangers, the contents of which could come more earnestly and with less stigma from the horse's mouth.
The entire process of having to be diagnosed with ‘gender dysphoria’ becomes even more odd when the World Health Organisation has recently removed this as a mental illness, 26 years after doing the same for homosexuality, confirming the international health community’s rationale that this is not a disease.

the whole process of applying for a Gender Recognition Certificate reduces people to a limbo-like, dependent state, forcing them to await positive feedback and affirmation from a bunch of unseen ‘elders’. The system can only be fit for purpose if it allows people to take complicated, mature decisions into their own competent hands and – through a system of statutory declaration – legally confirm they are who they know themselves to be.

At the baseline, it will cost you £140 to apply for a Gender Recognition Certificate. This can easily tot up to around £300 when taking into consideration the need for official medical testimony and oversight of statutory declarations. If, as rarely happens, you have to go to a meeting with the panel, you’ll have to add travel costs and time off work to your total.

The process is opaque, in that how decisions are made about the veracity of your identity isn’t made clear. You have to have “lived in your acquired gender” for 2 years, for example, but if you have been issued a deed poll with your new name one year ago, you will almost certainly be denied your Gender Recognition Certificate. None of the conflating and confusing rules are clearly spelled out for people to try to understand before applying.

What we’re calling for

Gendered Intelligence is calling on the Gender Recognition Act to be reformed brick by brick, in order to address the ‘ONE PIECE’ problems above.

Whilst we recognise that the Gender Recognition Act is but one small part of what needs to change to bring full equality for trans people, it’s the part we need to hone our focus on for now. It’s small but important changes like these that makes trans and non binary people’s lives that little bit easier, and that bit less bureaucratic.

You can read about what we're doing here but we also need you to help by filling out the consultation, telling us your thoughts, or writing to your MP.