A trans person is someone who feels that the sex or gender they were assigned at birth does not match or sit easily with their sense of self (their self-identified gender).

A trans person will identify as having a different gender to that which they were assigned at birth.

Trans people include those who were assigned male at birth whose gender is female (trans women), those who were assigned female at birth whose gender is male (trans men), and those whose gender cannot be summed up exclusively by 'male' or 'female' (non-binary). It can also include people who may dress some or all of the time in the clothes commonly associated with the ‘opposite’ gender (cross dressers), as well as people who may be questioning their gender identity (gender questioning)

Some trans people choose to transition which means taking steps to move away from the gender that they have been assigned towards the gender they self-identify with. This can include making visible changes to their outward presentation.

Some trans people change their name, title (Mr, Ms etc), pronoun (he, she, they etc), clothes, hair style, speech and body language. Some trans people undergo medical intervention such as taking hormones and/or having surgery. Trans people may use some or all of these things in combination.

Each person’s transition is unique to them.

For more about trans identities see:

There are a growing number of people who identify themselves as non-binary.

Being non-binary means not feeling that your gender identity fits naturally into the generic categories of male and female. Despite increasing numbers of people identifying themselves publicly as non-binary, there is still little known and understood about non-binary identities.

Slowly this is beginning to improve. The non-binary community plays and integral role in the continued education by providing sources and services for information and support; much of this is present on online platforms. These include a large presence on social media streams including: Tumblr, Twitter, Facebook, discussion forums, non-binary meet up groups, university and college groups and underground arts and media events.

For more on non-binary people see:

On the Subject of Being Trans Enough

However, there is a lot of pressure on trans people to live up to society's expectations of gender and the demands of medical diagnosis.

Even within the trans community, we are sometimes expected to feel a certain way about our bodies and to dress or act in specific ways. These expectations can make trans people feel like they are ‘not trans enough’. There is no easy answer for alleviating these feelings, especially if they come from within ourselves.

Our GI West group in Bristol talked about their feelings of not being 'trans enough'. They came up with some ideas of things to do to help with those feelings.

Here are a few ideas of things to do when you feel you are not 'trans enough':

1. Go to a group like GI.
2. Write about it. Maybe blogging or Youtube or you could write something for nobody to see in a journal or on a piece of paper that you throw away.
3. Look at pictures from when you were younger to see how you've changed.
4. Say how you are feeling, either to other people or just put it into words by yourself. Sometimes giving words to feelings can make them seem less scary, it also can help to break fears down into small parts.
5. Distract yourself, do something totally different.
6. Try thinking about yourself being something you are not, it might help you realise what you are (or might open up new possibilities!)
7. Make your favourite character trans.
8. Take care of yourself.
9. Use the feelings creatively, make a joke, a cartoon, a piece of theatre, a short story.
10. It's OK to not to want to do anything, it's OK to just feel how you feel.

It is unlikely that any two trans people will describe their experiences of being trans in the same way or identify in exactly the same way. Trans is what is known as an umbrella term – meaning it applies to a diverse range of individuals and can include many different identities. For instance a group of trans people could include people who describe themselves in a range of different ways such as genderqueer, bigender, transmasculine, transfeminine or androgyne.

Trans is something that we self-identify as meaning only you can decide if you are trans and no one has the right to tell you that you are not trans.

Having a relatable community is important. The lack of understanding and education in society means non-binary and trans people can feel cut off from different communities and social groups. It can be important and empowering to find others who you belong with, others who share similar experiences, thoughts and identities. You can do this is many ways. 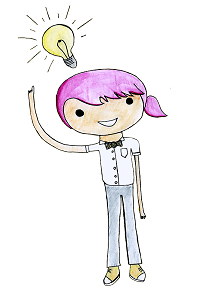