Collaboration with The Corpse Project

Gendered Intelligence is working with The Corpse Project to explore what happens to the body after death, and specifically how the trans or gender variant body is treated.

The Corpse Project is a structured exploration based in England, UK, asking whether some ways with our body after death are better than others, for us humans and for the earth. We are serious but not solemn as we explore this endlessly interesting question and through the expertise of others we:

- Look at the science.
- Listen to a wide range of views.
- Learn from the wider debate about death and dying and try to take a global and historic perspective on the dead body.
- Make recommendations and work to catalyse change.

People often find it difficult and awkward to talk about death. The question of what will become of our bodies after death is not easy - and it's one that many people put off thinking about until it becomes urgent.

In our gendered society, trans and gender variant people's understanding of themselves and their bodies can be erased when they come in to contact with public services and institutions. Combined with our general reluctance to talk about death, there is a great danger that trans people's wishes for their body after death will not be respected.

It is vital that we talk about how we treat the trans and non-binary body after death.

In June 2016 participants spent four days exploring different ways of laying the body to rest and looking at how rituals are created to honour and remember the dead.

They visited a crematorium, a cemetery and a funeral director, learn about rituals and made their own ‘rituals for the trans soul’.

They looked at how to turn the body into compost, the pros and cons of burial and cremation, future technologies and about how various cultures through the world treat bodies in a specific and gendered way after death.

This is a sensitive but interesting, universal and very urgent topic, as land for burial gets scarce and we need to protect the environment. It is also very important that our bodies are dealt with in a way which respects our identity when we are alive. We will make sure this is a creative, respectful experience for all participants. It will be thoughtful but not miserable, and sometimes fun. 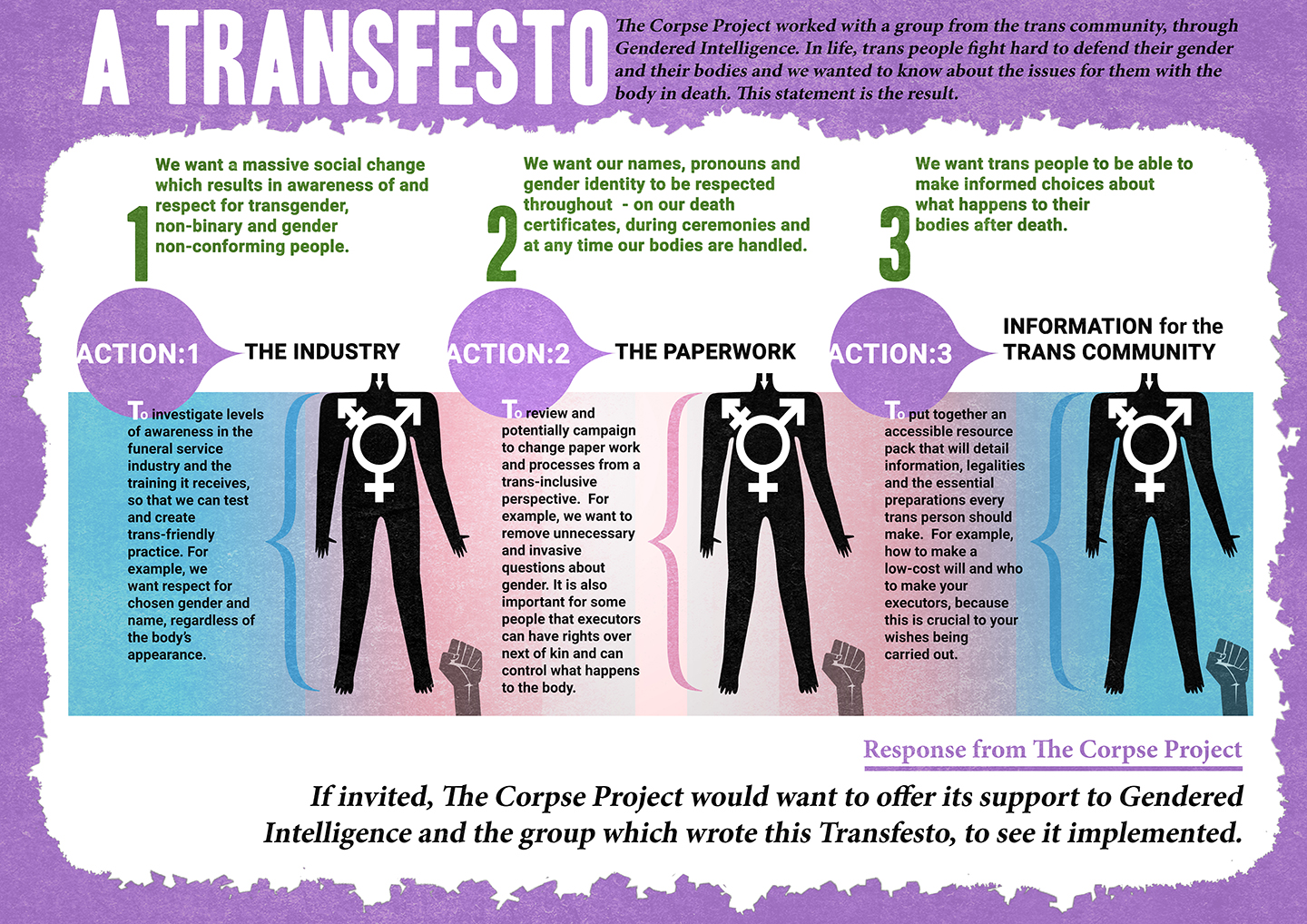 The Corpse Project want a massive social change which results in awareness of and respect for transgender, non-binary and gender non-conforming people. Below you can find the action points that participants came up with as important next steps to improve the situation for trans people in relation to dying.

To investigate levels of awareness in the funeral service industry and the training it receives, so that we can test and create trans-friendly practice. For example, we want respect for chosen gender and name, regardless of the body’s appearance.

We want our names, pronouns and gender identity to be respected throughout – on our death certificates, during ceremonies and at any time our bodies are handled.

To review and potentially campaign to change paper work and processes from a trans-inclusive perspective. For example, we want to remove unnecessary and invasive questions about gender. It is also important for some people that executors can have rights over next of kin and can control what happens to the body.

We want trans people to be able to make informed choices about what happens to their bodies after death.

ACTION 3: INFORMATION FOR THE TRANS COMMUNITY

To put together an accessible resource pack that will detail information, legalities and the essential preparations every trans person should make. For example, how to make a low-cost will and who to make your executors, because this is crucial to your wishes being carried out.

The Corpse Project is supported by the Wellcome Trust.